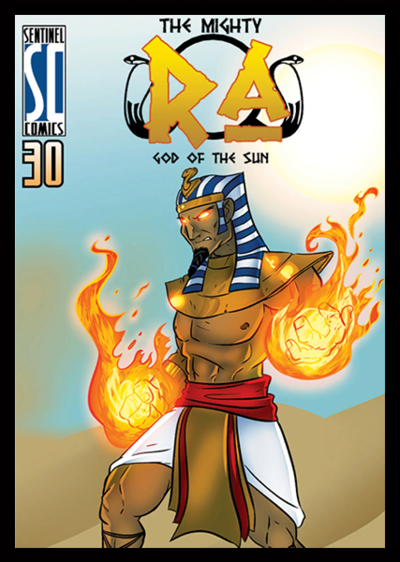 Is Ra the true Egyptian God of the Sun, or just a madman with the power of fire? Or, is he something else entirely?

We start with a quick overview of who Ra is, and then start breaking down his long and somewhat convoluted story. Let's dig right in.

Starting just before the seventeen minute mark, Adam attempts to name all nine of The Ennead. He does... OK. More on those folks next week!

Around 28 minute in, we start getting into just HOW all of this Egyptian mythology stuff has been translated into modern Sentinel Comics.

Lots of great questions in today's episode, with a ton of story stuff covered entirely in the Q&A segment.

At 55 minutes, we get a question that sparks a REALLY long answer with a ton of story. Enjoy!

Wow, this is a long episode. Whew!

Lots of big reveals in the future section. We talk about the future of a minor side character from the card game timeline and what happens to them in the Tactics timeline. And then! In the RPG timeline section, we go into SPOILERS! Skip from 96:55 to 103:55 if you want to avoid major story spoilers for the RPG.

In a couple days, we're recording the episode about The Ennead AND the interlude about Nemeses! Get your questions in now!

Mechanics of these gods in Sentinel Comics

Behind the scenes: during the initial brainstorming session for the game, they decided that they wanted to include a figure from mythology, but which pantheon (there are good reasons for not doing the Norse one)? They eventually landed on Egyptian myths, because they just liked it, but also because so much of it is actually not really well-known enough to really bother people with getting details "wrong". Plus, the historical sequence of prominent cults mentioned previously lent itself to a neat set of stories they could model the comics' history on.