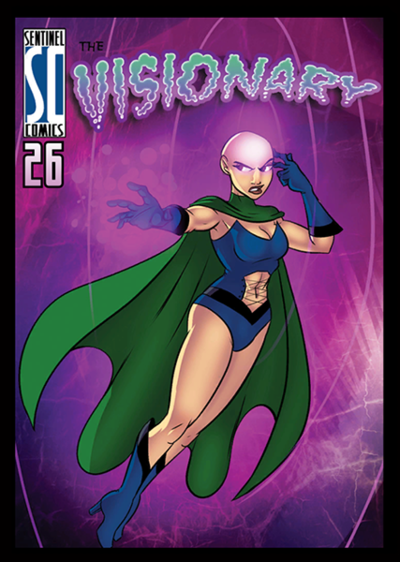 Time travel and psychic shenanigans! The many forms of Vanessa Long!

We deal with multiple realities - and multiple Vanessa Longs (Vanessas Long?) in the first ten minutes, so buckle up!

So, we promised a link to the Lazer Ryders Soundtrack in the show notes. Here it is on Spotify. It's also available on Bandcamp. Not sure if there's a better place to get it, but those are both pretty legit! Also, for a sample, check out the song Trevor chose for our episode-ending music.

The questions segment has a bunch of nonsense about Biomancer's creations, the Cult of Gloom, and even the kingdom of Cooltopia? I don't know what's happening with our own podcast these days.

In the future section, we have two spoiler sections. The last bit of the Sentinel Tactics future is spoilers (from 95:30 to 96:35), and the entire Sentinel Comics RPG timeline segment is also spoilers. (from 97:09 to 99:20).

As mentioned, we're already at Gen Con! If you'll be at Gen Con on Saturday, come crash our Letters Page Live recording panel on Saturday!

Also, because we're in Indianapolis and away from our office all this week, we've already recorded the RevoCorp/Benchmark episode! It's too late for your questions! While we're gone, if you want to ask questions for upcoming episodes, I'll leave you with this hint: we have just begun to cover the Prime Wardens and their nemeses...