The Letters Page: Episode 39
The Scholar 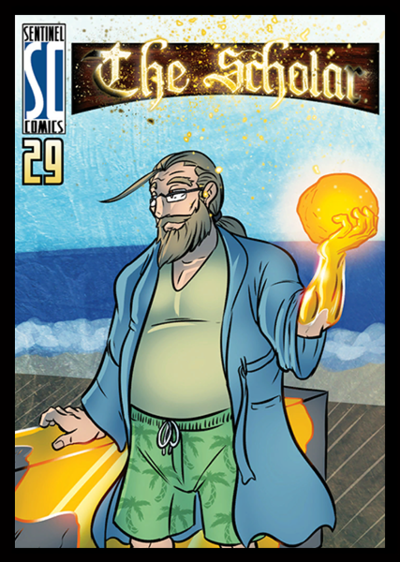 A pharmacist, an apothecary, a teacher, and more! It's The Scholar!

Everyone should go to Adam's Halloween party. Except Christopher.

There are a lot of rabbit trails in today's episode, but that's mostly because The Scholar's story does a fair bit of wandering. Also, it features some depressing bits, so we wander to keep from getting too down.

Fastest transition to the Questions section ever! We end the Overview segment only 8 minutes in!

At the 11 minute mark, we field a Powerhound question about us messing up published issue numbers again. And! To be fair! We did mess it up. *sad trombone sound* But not entirely! That's worth something, right? Right? Look, we give a slight hint about a Sentinel Comics RPG Starter Kit as a result, so hopefully that makes up for it.

Finally, right around 25 minutes in, we get into the proper tale of The Scholar's backstory. His way-back-story, really. Buckle up!

Just after 34 minutes in, Adam claims that a "soda" is a "tincture". It is not. Oh well. You don't listen to this podcast for medical advice/terminology, do you? Gosh, I hope not.

We finally get back to your questions at the 47 minute mark. Whew! Longest answer ever! Over 20 minutes?! What were we thinking?!

Right after 50 minutes in, we reveal the true origins of the thing that became The Scholar's Philosopher's Stone. Ominous!

Just before the 66 minute mark, we drop the biggest lie of all! Please don't think we were being serious! We definitely weren't!

Right after that, we get into another big story - another progression of The Scholar's story. Bit by bit, we'll get through this whole thing!

A little after 76 minutes in, we get back into the topic of Progeny's head flying through space. Cool: y/n? You decide!

The question we get an hour and a half in reveals a bit of story involving The Scholar, Guise, and even OblivAeon! This is a big story that we don't fully explain... got questions? Sure you do! Ask them here before Friday, October 20th and we'll follow-up in the next episode!

See you next week!