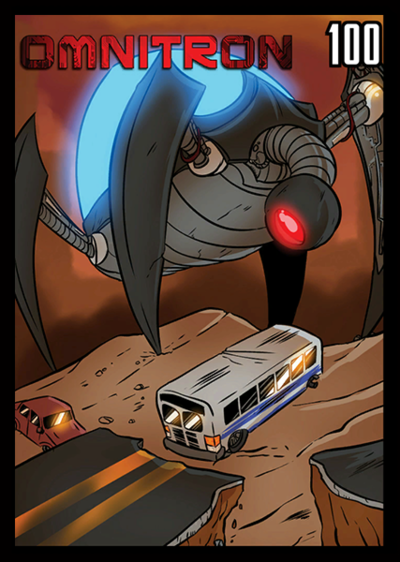 This is both a villain and a hero episode! And even more!

At the very beginning, we mention that our business partner Paul makes a video series with his brother where they talk about rockets and stuff. It's called Specific Impulse, and they have a bunch of great videos on YouTube! Check them out!

As promised in the episode, here is the chart that helps explain the Omnitron(s) timelines: For details on how this chart works and what each color refers to, listen to the episode!

Warning: With the upcoming images in this point, we recommend you don't scroll through them all now, but wait and scroll down to each of them as we reveal their existence in the episode, just to have the correct forms of Omnitron in mind as we tell the various stories.

Now, a parade of Omnitrons!

And in the upcoming Sentinel Comics RPG? What is the fate of Omnitron there? Only time will tell...

At 63:35ish, Christopher says, "In the Sentinel Tactics timeline, we have the hero: Omnitron." As you can probably tell from context, he meant the Sentinel Comics RPG timeline. He just got caught up in the moment! Whoops!

Join us next week for an episode about Mister Fixer, and the week after that for The Chairman! Get your questions in now!

Notes on the Show Notes Diagram