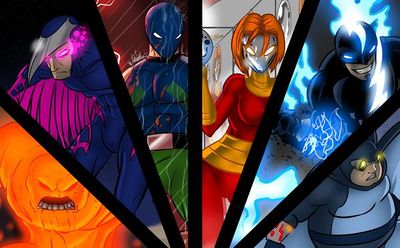 A team of villains, led (sort of?) by Ambuscade! Let's learn more!

This interlude is pretty much just an entire episode. Yes, we're aware we need to revisit what we're calling interludes. We'll explore that on next Thursday's... whatever it is we call it. But, yeah, this has a ton of story, including some major reveals!

We start off by talking about Ambuscade, Re-Volt, Desert Eagle, Ray Manta, Magman, and Glamour. We do some backstory and overview stuff. Then! It's time for your questions, which we kick off by digging into the biggest reveal of the whole Slaughter-House Six story.

The questions are mostly organized by character, but they do jump around a little bit. You'll figure it out - I believe in you!

About 72 minutes in, a conspiracy theorist leads us down a twisting trail of what the future will hold with AI and such. Christopher reveals his secrets. Some of them, at least.

Upon this episode going live, you still have a few hours left to get in your questions about The Sentinels/Void Guard!