Destroy all Clone cards. Proletariat regains 3 HP for each card destroyed this way. Play the top card of Proletariat's deck.
Art: Proletariat absorbing his clones;
Flavor text: "Just as I am the people, the people are me. You cannot prevail." - Proletariat, Vengeance #5

Reveal cards from the top of Proletariat's deck until 2 clone cards are revealed. Put them into play. Shuffle the other revealed cards into Proletariat's deck.
Art: Multiple Proletariat clones swinging hammers into Bunker;
Flavor text: "This walking tank shall fall before the might of the people!" - Proletariat, Freedom Five Annual #27

Reduce damage dealt to the Proletariat with the lowest HP by X, where X = the number of Prolatariats in play.
Art: Proletariat clones grouping together to take a blast from Absolute Zero;
Flavor text: "So many of them! Where are these guys coming from?" - Absolute Zero, Freedom Five Annual #27

Increase melee damage dealt by the Proletariat with the highest HP by X, where X = 7 minus the number of Proletariats in play.
Art: Proletariat with a red outline expanding from him with his left fist clinched;
Flavor text: "I have strength in numbers AND strength alone!" - Proletariat, Vengeance #3

Whenever the Proletariat character card deals damage to a Hero target, the clone card with the lowest HP deals the Hero target with the highest HP 1 melee damage.
Art: Proletariat hitting the Naturalist in the back and another Proletariat punching him from the front;
Flavor text: "Just when I thought the giant guy yelling train things was the worst of my problems... " - The Naturalist, Vengeance #3

At the end of Proletariat's turn, this card deals the Hero target with the second lowest HP 1 projectile damage. Then, if Chrono-Ranger is active in this game, this card regains 3 HP.
Art: A closeup of Doc Tusser;
Flavor text: "Meanness like his don't just happen overnight." - Chrono-Ranger, Vengeance #4

At the end of Proletariat's turn, each Hero target deals itself 1 infernal damage. Then, if the Scholar is active in this game, each Hero character card deals itself 1 toxic damage.
Art: Hermetic holding a stone in his hands;
Flavor text: "Poison? No, no. These vials are full of antidotes." - Hermetic, Exordium #4

At the end of Proletariat's turn, destroy all Hero targets with 2 or fewer HP. If Tempest is active in this game, increase damage dealt to Hero targets by 1.
Art: Vyktor in a torture room;
Flavor text: "I have found my place here on this wretched planet. All must suffer." - Vyktor, Exordium #3 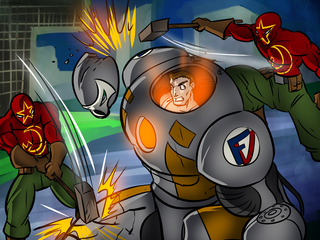 The Everyman
Ongoing Ability
All Proletariats in play count as Proletariat. They all share one set of Actions, Defense, Movement, and Health. 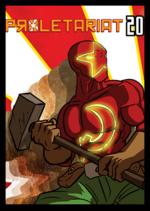 Aleksandr Tsarev was an exemplary Russian soldier who was in active service near the end of World War II. When the war ended in the mid-1940s, he was approached as part of a secret Soviet program to make the perfect combatant for the anticipated confrontations.

In 1949, as part of a highly-classified and controlled experiment, Tsarev was exposed to cosmic radiation from a lump of otherworldly material the Soviet scientists had been experimenting with for years. His body chemistry reacted wildly, cells splitting and reproducing rapidly, tearing his cellular structure apart. The scientists at first feared the experiment to be a failure and the subject to be an unfortunate casualy; however, after months of stabilization and medical attention, Tsarev survived, apparently unchanged.

One day, during combat training, Tsarev was inadvertently struck with excessive force - a blow which should have shattered bone. Instead, his body split at the point of impact and immediately reformed… into TWO Aleksandr Tsarevs! Two identical men stood where only one had been moments before. The two soldiers shared thoughts and experiences and acted as extensions of each other, but were two complete bodies, each with the full capabilities of the veteran soldier.

He was quickly reinducted into the top secret program, and test upon test was run, determining the extent of his self-duplication abilities. It seemed that mortal threats would disrupt and duplicate his cellular structure, leaving him unharmed and more prepared to meet the threat then before. Once his heart rate returned to normal, the multiple forms would be re-absorbed, so the copies would never last particularly long. With time and training, Tsarev was able to exert more control over his powers, and could even jump start his duplication process at will. However, many duplicates would wear significantly on his mind, as he struggled to control each individual copy of himself. This put a limit on how many identical soldiers could be active at once, a limit with Tsarev constantly pushed.

With the ongoing threat of what came to be known as the Cold War, Aleksandr Tsarev was cryogenically frozen and kept in a unlisted bunker in the USSR, waiting to be deployed at the hour of their greatest need. Decades passed, and the decline of the Cold War resulted in the few that knew of this secret soldier conveniently forgetting his existence.

Fast forward to modern day. Baron Blade unearthed records of Tsarev, and broke him free of his containment. He convinced the solider that his old causes mattered not, but that his freedom was taken from him by the opppressive, so-called "Freedom Five". The Baron likened Tsarev's existence to that of "Absolute Zero", Ryan Frost, a willing lap-dog of the goverment due to his own bizarre nature. Did Tsarev want to end up like those people, or to help the architect of a new world?

Taking the name Proletariat, Tsarev now fights alongside Baron Blade and the other members of the Vengeful Five. Proletariat can be found throughout the battlefield, assaulting his opponents with numbers, skill, and fury!

After numerous mighty battles came the inevitable defeat of Baron Blade's team, the Vengeful Five. The Baron's thawed-out solider, Proletariat, was left once again without a purpose, but now knew of the strength and oppression of his foes. He vowed to take down the Freedom Five - they dispensed justice, but who were they to play judge and jury?

Since his initial defeat, Proletariat often works alone, though he sometimes allies with and against many other major players. He fights his crusade against those who he believes have sought to rule the common man - both so-called heroes and villains alike. Injustices against the many must be paid by the few oppressors, and Aleksandr Tsarev was the man, or men, to collect that debt.

It's hard to know what side Proletariat is on. He may join your fight if he feels your cause is worthy, but he may also appear to strike you down if he deems you in the wrong. Beware of the hammer-wielding duplicator; the might of many is impressive indeed!