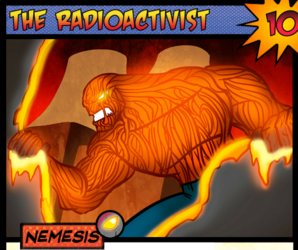 Radioactivist was originally known as Information Needed - He became obsessed with the Freedom Five and Unity in particular after an attack on a Nuclear Powerplant where Unity was among those who were there to stop the villains. He was subsequently mutated by the radioactive energy, becoming The Radioactivist.