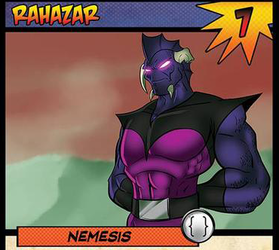 A Minor Baron of sorts in space (Though he owns a entire planet). He is an unimportant member of his species, but he encounters Parse and Captain Cosmic in their adventures in space when they need to pass through his territory. They discover how Rahazar has set the captured people of his planet into slave labor, and Parse dismantles his entire operation one leg at a time. He vows vengeance, and is seen occasionally attempting to get it.