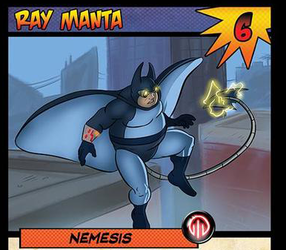 Raymond Mantey - Not a hired soldier like the others of the Slaughterhouse Six, but a scientist/researcher who develops stuff for RevoCorp. More involved in the tech side of things like the Eagle Eye project. His suit is something that he'd put together on his own and when he was asked to put together gear for the others he did so on the stipulation that he got to go out into the field too. The suit has a tail stinger and utility/monitoring equipment (he's particularly interested in keeping track of robots) and he's "kind of a loser" but they'll get into that later.