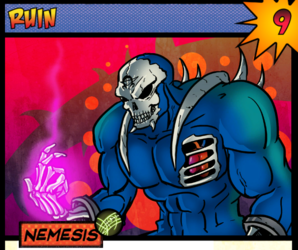 Ruin was summoned by Gloomweaver during the Vengeance Storyline. Ruin was one of the major forces of the Realm of Discord, and a Void Entity, until Gloomweaver defeated him. Afterward, he was reduced to being a lackey, sent to the real world to harass heroes in the name of Gloomweaver.

During the Vengeance Storyline he was sent after Nightmist, but encountered Argent Adept first. Intrigued by the Virtuoso of the Void (due to the connection they both share to the Void) he deviated from his mission, and was defeated by Argent Adept