Sentinels of the Multiverse: Scholar

Incapacitated - The Scholar and the background are covered in curved, circular symbols.

The Scholar deals each non-Hero Target 1 Fire Damage. Then, The Scholar regains X HP, where X = the number of Targets dealt Damage this way.
Art: The Scholar touching the ground with his right hand as it starts to erupt towards Blade Battalion members;
Flavor-text: "You'd better hope you can move fast enough!" - The Scholar, Vengeance #2

Each Player may either move 1 card from their trash to the top of their deck, or put the top card of their deck into play.
Art: The Scholar with a hand on Expatriette's shoulder in the rain;
Flavor-text: "What I want to find is the truth. What are you looking for?" - The Scholar, Emigrant's Song #2

The Scholar deals 1 Target X Radiant Damage, where X = the number of non-Hero Targets in play.
Art: A silhouette of the Scholar holding the philosopher's stone above his head with energy coming from it;
Flavor-text: "If life gives you lemons, make a lemon cannon." - The Scholar, Stranger in a Strange World #9

Search your deck for an Elemental card and put it into play. Shuffle your deck. You may play a card.
Art: The Scholar running from an Enraged T-Rex;
Flavor-text: "Come on! Seriously! Give me something to work with here!" - The Scholar, Vagabond's Tale #5

Art: The Scholar relaxing in a chair with a beer in his right hand;
Flavor-text: "What do you mean, 'lazy'? I'm preparing. Planning. Strategizing." - The Scholar, Virutoso of the Void #11

Know When to Turn Loose (x2)

Discard your hand. The Scholar deals 1 Target X Lightning Damage, where X = the number of cards discarded this way.
Art: The Scholar holding the philosopher's stone in both hands releasing energy at Akash'Bhuta;
Flavor-text: "In a lot of ways, this would have benefited from planning." - The Scholar, Virutoso of the Void #12

The Scholar deals 1 Target 2 Infernal Damage. A Target dealt Damage this way cannot deal Damage until the start of your next turn.
Art: The Scholar, with his right hand glowing purple, putting his right hand up to Apostate's chest who looks withered;
Flavor-text: "Stop. Just stop. Don't you think you've done enough?" - The Scholar, Nightmist #8

Each Player draws 1 card. Each Hero Character card may either regain 2 HP or deal themselves 3 Psychic Damage and use a Power.
Art: The Scholar talking with the Wraith in the what appears to be the middle of a swamp;
Flavor-text: "Listen, I didn't come here to talk about legacy. Who are you?" - The Scholar, Mystery Comics #28

The Scholar regains 2 HP. Draw 2 cards.
Art: The Scholar laying with his eyes closed against a tree with the philosopher's stone next to him;
Flavor-text: "Never underestimate the value of forty winks. Or eighty." - The Scholar, The Savage Haka #40

Redirect all Damage that would be deal to Hero Targets to The Scholar. At the start of your turn, destroy this card.
Art: The Scholar absorbing energy into his body and the philosopher's stone;
Flavor-text: "A lot of people die - that doesn't mean you're going to die." - The Scholar, Vagabond's Tale #3

At the start of your turn, either discard 1 card or destroy this card. Reduce Damage dealt to The Scholar by 2.
Art: The Scholar holding his right arm up which has turned to Iron standing next to the Dreamer;
Flavor-text: "Show me your worst. I have weathered more than you could guess." - The Scholar, Nightmare World #5

At the start of your turn, either discard 1 card or destroy this card. Whenever The Scholar regains HP, The Scholar also deals 1 Target that much Energy Damage.
Art: The Scholar's body is glowing yellow;
Flavor-text: "Pay attention: I am not a ghost. Do not be alarmed." - The Scholar, Tome of the Bizarre #36

At the start of your turn, either discard 1 card or destroy this card. Whenever The Scholar would regain HP, increase the amount of HP regained by 1.
Art: The Scholar in a liquid form being stabbed by Ambuscade from behind which just goes through him;
Flavor-text: "Qu'est-ce que c'est?!" - Ambuscade, Temporal Targets #5

Bring What You Need (x2)

Art: The Scholar looking at a tennis racket in a room filled with a beach ball, rug, and guitar;
Flavor-text: "Ah, simple treasures. They tell the story of a man's life." - The Scholar, Vagabond's Tale #1

Whenever The Scholar would be dealt Damage, reduce that Damage to 0. At the start of your turn, The Scholar regains 2 HP and destroys this card.
Art: The Scholar surrounded by flames clutching the philosopher's stone in both hands;
Flavor-text: "He stood, wreathed in flame, but he did not burn." - Fanatic, Mystery Comics #281

Art: The Scholar smashing the philosopher's stone into the head of Gloomweaver;
Flavor-text: "The truth is power! Your lies are feeble at best." - The Scholar, The Fabric of Despair #5

Elemental cards are not Limited 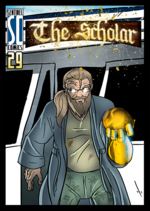 No one really knows where John came from. He just showed up one day in the Everglades on his houseboat. The gators didn’t seem to pay him much attention. Once in awhile, one would crawl up on his boat, and John would come out and talk to it in hushed tones until it wandered off.

Folks found John strange, but it was clear he wasn't trouble. Just a kindly old coot who kept to himself. All sorts of stories were made up about the strange, swamp-dweller, but none came close to the truth. John Rhodes was, in fact, the world’s most talented alchemist, and wielder of the Philosopher’s Stone.

John had always had an affinity for altering the very threads of existence. He could feel them as they stretched around him, connecting everything to everything else. So, when those lines drew him to a mysterious, glowing stone, he knew it was right and proper to take it with him. The stone allows him to twist the lines, rather than just perceive them, and he can now easily transmute objects into other materials.

John, The Scholar, mostly keeps to himself, though he’s always willing to share a bit of wisdom and a bite to eat with anyone who passes by. However, now and again, he feels the ley-lines pull and twang sharply, which shouldn’t happen. He’ll travel from one place to another, easing the tension on the lines by stopping the odd, extra-planar entity from entering this dimension, or keeping the crazed scientist from pulling the moon into the earth, or halting the nightmarish legions of a comatose little girl. Sometimes, he’ll work with other gentle souls to accomplish his goal - he doesn’t mind a little company now and then. Mainly he just wants to keep things copacetic. 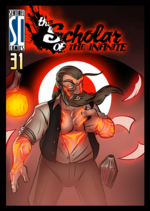 Variant: Originally revealed during the Villains of the Multiverse preorder event.'

First Appearance: Tome of the Bizarre #59

John Rhodes has learned far too much and seen too deeply. He now acts as a gate between reality and the infinite void. He cannot protect himself, but can he protect his allies from what is yet to come?