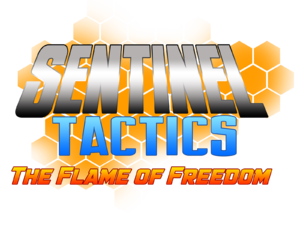 Sentinel Tactics is a tactical combat game that uses a hex grid map to represent terrain. Each player controls one or more heroes or villains, each of which has unique powers. Combat is based on the rolling of six-sided dice. Whereas Sentinels of the Multiverse is a fully cooperative game, Sentinel Tactics is a team based game. Groups of players will cooperate against either a villain player or against another team of players, so while the game is competitive, cooperation and teamwork are still vital to the gameplay.

The gameplay engine for Sentinel Tactics is based on the TacDice system developed by Living World Games. We have been working with the fine folks there since last year, when they came to us with their heroic idea, and we are thrilled to jointly present this collaborative work. The primary designers of Sentinel Tactics are Luther Hendrix, Kevin Nunn, and Christopher Badell.

Now, we know there has been a lot of interest in miniatures, but we also want to keep the cost of the base game as affordable as possible. Thus, the game will come with tokens to represent each of the heroes and villains. There will also be a miniatures pack sold separately for people interested in adding miniatures to the game in the place of the tokens (or for people just interested in miniatures of their favorite Sentinels of the Multiverse).

Sentinel Tactics takes place a few years after the primary storyline of Sentinels of the Multiverse, so you will see changes in the look and experience of the heroes and villains you already know. There will be more information about how the Multiverse has changed as we get closer to the launch of the game.

This coming week at Gen Con, we will be hosting preview games of Sentinel Tactics in the Greater Than Games Booth (Booth 2123), so definitely come by and check it out! Granted, it’s still a mostly bare-bones prototype, but you’ll get a very solid feel for the gameplay, which is a blast!

Look forward to a Kickstarter for this game next year, which will give more information about the game itself, the release date, and the changes it brings to the Multiverse!

And remember, keep on saving the Multiverse!

Two years ago, the super team at Living Worlds Games came to us here at Greater Than Games with an idea to use their TacDice system as the basis of a tactical, dice-based game featuring the Sentinels of the Multiverse! We’ve been working with them since then, and are now thrilled to jointly present this collaborative work.

The story which drives Sentinel Tactics: The Flame of Freedom takes place several years after the primary storyline of Sentinels of the Multiverse card game, so don’t be surprised by the changes to the heroes and villains you already know!

Sentinel Tactics puts you in control of one of the many super-powered characters from Sentinel Comics. Whether playing in tournament-style skirmishes or playing through the storyline of The Flame of Freedom in the included scenario comic book, each player controls one of our familiar heroes or villains, each with their own powers and abilities!

Combat takes place on a hex-grid map, and attack and defense is based on the rolling of six-sided dice. Whereas the Sentinels of the Multiverse card game is a fully cooperative game, Sentinel Tactics is a team based game, pitting groups of heroes and villains against each other. Groups of players will cooperate against either a villain player or players, or against another team of players! Sentinel Tactics is a competitive game, but cooperation and teamwork are still vital to the gameplay!

The first story we tell in the Sentinel Tactics line of games is The Flame of Freedom, which takes the players through the Freedom Five’s interactions with their long-lost ally, Ra! Sentinel Tactics: The Flame of Freedom will include the heroes Legacy, Bunker, Tachyon, The Wraith, Absolute Zero, and Ra, as well as the villains Baron Blade, Omnitron-V, and Citizen Dawn.

Out of the box, the game is balanced for teams comprising any heroes and/or villains in head-to-head skirmish combat. Additionally, Sentinel Tactics: The Flame of Freedom includes a scenario book which tells the comic book stories and lets you play out the heroes’ battles with the dastardly villains! In these scenarios, the villain player has access to additional scenario powers, rules, and minions that allow them to take on an entire team of heroes!

We know there has been a lot of interest in miniatures for Sentinels of the Multiverse, and with the introduction of Sentinel Tactics, we are now making them! However, we want to keep the cost of Sentinel Tactics as affordable as possible and also give fans of the Sentinels of the Multiverse card game the ability to get miniatures of their favorite characters without buying the whole game.