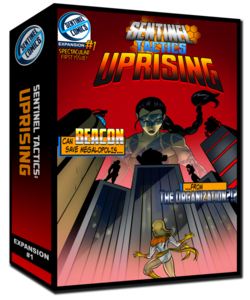 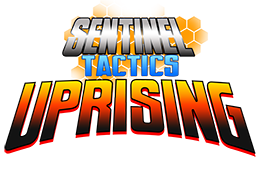 Uprising is an Expansion to Sentinel Tactics, comprised of stretch rewards from the Flame of Freedom Kickstarter. Each character was unlocked through the kickstarter and added to this expansion.

From the Sentinels Tactics: Flame of Freedom Kickstarter

At this point, we're moving through Stretch Goals at a rate that will let us give you all sorts of additional characters. And more playable characters is a great thing! But you also need more story, right? We certainly want to tell more story! Therefore, we are going to be collecting each of the unlocked characters into an expansion called Sentinel Tactics: Uprising!

Uprising will not just include those characters, but also a scenario book, with scenarios which revolve around the unlocked characters, bringing them into the ongoing storyline of Sentinel Comics! The scenarios will involve comic-book style stories, map setups, and scenario specific tokens, powers, and even side characters!

Similar to the Promo Power Cards, this unlocked reward will continue to get better with each additional Stretch Goal - the more characters and elements you unlock, the more awesome Sentinel Tactics: Uprising will be!

But who gets Uprising? YOU ALL DO. Every backer on each Pledge Level will be getting a free copy of Sentinel Tactics: Uprising! The miniatures for the characters from Uprising are still separated out into the "Super Heroic" levels, but every level will be getting the Uprising expansion, full of exciting game and story content!