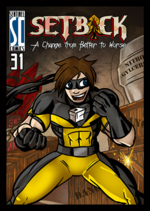 Pete Riske had just been fired from his third casino job. You’d think they’d stop hiring him for these jobs! Still, he interviewed well, and things just seemed to fall into place for him. Once in awhile, that is. Usually, they fell out of place. People had always pitied Pete for his bad luck, but he just didn’t see it that way. Sometimes, things just don’t go your way. He wasn’t worried. In fact, he’d just gotten information about some medical testing that he could sign up for - it was supposed to pay big! That would at least keep him on his feet until he found another job.

Turns out, that medical testing was run by some chap named Baron Blade. Weird guy, really. Short temper, too. But, he assured Pete that the hoses and wires and vats of weird goo were entirely normal and up to whatever local standards might apply. Plus, he got to stay in their cushy facility for a couple weeks during testing! Look, all the cable channels ever might not be that big of a deal to you, buddy, but not everyone has that kind of access. Just sayin’.

So, the couple weeks went by, and the doctors (at least, they claimed they were doctors…) were all freaking out about what was going on with other test subjects. Sure, Pete never saw any other test subjects, but he hoped they were ok. He was feeling great! Never better, in fact. I mean, all his hair fell out, so that was kind of a bummer, but he was looking good and feeling good. He’d gained about 20 pounds of muscle and was stronger and faster than ever! He’d never been a terribly athletic guy, but now he was confident that he could run at least a 5k! That’s far, right? He’d say you can’t put a price on that, but apparently the Baron could, and the price was not leaving the facility for a lot longer. Additional testing or something like that. Well, Pete had another job lined up, and he really was getting bored of the same blank walls, cable access or no. He had noticed the doors were usually locked at night, but one night, they weren’t, and he just walked right out! Go figure, right?

That’s when things really started to get strange. Just when Pete was starting to feel like the luckiest guy ever, everything fell apart. He slipped and sprained his ankle on the way home, knocking over a trash can, which rolled into the street and caused a major pile-up. Key government officials on the way to an important meeting were held up by the delay, and as a direct result, the new reservoir didn’t get built in time, and hundreds of basements were flooded! Of course, that didn’t happen for a few more weeks. In the meantime, Pete got back home, only to learn that his apartment had burned down while he was away for the medical testing! And he missed his interview he had lined up. Great.

As he was sifting through the ashes, hoping to find some remains of his lucky bottlecap collection, he looked up and realized he was surrounded by big guys in blue and green armored uniforms. They parted to let a guy in a labcoat through - it was Baron Blade! Yeesh, what did HE want? Turns out, Pete’s newly found physical prowess was exactly what the Baron was looking for and he was not too thrilled to lose his one successful test subject. Things were looking tense, but then, a giant metal robot fell out of the sky and started throwing the blue and green guys around! Actually, it wasn’t a robot at all, but a guy in a mech suit who called himself Bunker, and he just happened to be flying by in his transport helicopter. What a coincidence!

So, now, Pete has been hanging out with these Freedom Five people. They’re pretty cool. The fast lady called him a bit of a setback, and he liked the sound of that. They didn’t seem too keen on the idea, but Pete calls himself Setback now, and he helps out where he can. You know, just doing his part, right? 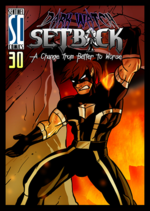 While things deteriorated more and more in Rook City, the heroes who regularly patrolled the failing city grew increasingly concerned about the disappearance of Mr. Fixer. Three of the those heroes joined forces: Expatriette, Setback, and Nightmist. They worked together to protect Rook City and to investigate the loss of their friend.

When Amanda told Pete that they were going to team up, he had reservations. Of course, he was excited to help, but that was exactly the problem. He knew how things go for him - he didn't want Dark Watch to have any major setbacks. Even still, you can't help if you don't try, and Pete was very good at trying. When working with Dark Watch, Setback often leads the charge. He likes getting up close and personal with his opponents and also far enough away from his allies that he can't accidentally trip them up. Though he does like to spend as much time with Amanda as possible....

The hero team known as Dark Watch has gone through a lot. They were originally formed by Expatriette, Setback, and NightMist who were seeking to uncover the truth behind the events of the death of their friend, Mister Fixer. So, it was a bit of a rough start that the first major threat to Dark Watch was a mystically revived Mister Fixer! They managed to survive and even helped him reconnect his mind and body, so Mister Fixer became the fourth member of Dark Watch, fighting alongside those who risked everything to save him. 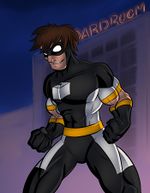 Part of the indefinitely delayed Battle For Broken City set

Setback has always been the heart of the team. Passionate, upbeat, and eager to help, Peter Riske's bad luck is balanced by his indomitable spirit. His favorite place to be is between his friends and danger, working to prevent any harm from befalling those he cares for. Knowing that what he does makes a difference, even given his propensity for disaster, is the best heroic motivation that he could imagine.