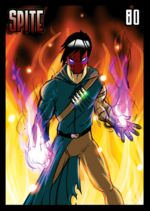 No test subjects remain from the previous shipment from R.C. Penitentiary death row. Due to receive a new test group today.

500s batch was based on a derivation from a single compound. Moving to 600s batch, a more varied test set.

Beginning with PL Compound 601. Failure. Lost Subject Haarmann. No positive effect in Subject Donovan, but any negative effects seem to be minor.

He’s looking at me.

Office note: With the destruction of the Barzakh Wing, please destroy this Testing log and all other Testing Logs from that wing. Also, report all subjects from R.C. Penitentiary as “lost, unrecoverable” and stop any additional subject transfer

Jonathan "Jack" Donovan was a prolific serial killer, murdering 43 people in Rook City before finally being brought to justice. After being sentenced to execution, he was offered a deal: volunteer as test specimen for a secret project by Pike Industries and have his sentence commuted to life imprisonment. Donovan and a number of other prisoners were subjected to a series of experimental drugs and mutagens, which killed most of the subjects in the first test. Donovan not only survived the tests, he flourished, granted terrible strength and power by the chemicals in his system. He escaped the lab, but was overwhelmed with hunger and need. As Spite, he continues killing more and more victims and breaking into Pike laboratories to ingest corrupting substances. 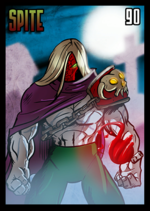 Variant: Originally received during the 2013 Holiday

The drugs had ravaged Spite’s system, leaving his body a twisted mess. But Donovan’s mind still worked, and it was overflowing with hatred. Hatred towards the weak people who filled Rook City with their filth. Hatred towards those costumed heroes who tried to get in his way. Hatred towards The Wraith as she raised her arm to point at him. Then, he died; killed both by his own system turning against itself and a speeding slice of serrated steel, which left a ragged trail as it passed through his head.

The demon god known as GloomWeaver felt Jack Donovan’s hatred, even from his twisted throne in the Realm of Discord. The lord of despair strained to reach through the veil between worlds, parting it just enough to snatch Donovan’s soul. He made the serial killer an offer to continue his work, but now with a new, infernal purpose.

Once again in his wreckage of a body, Spite: Agent of Gloom now hunts victims to bring about a new era of true gloom. His carcass is held together with eldritch magics and a dark covenant, binding his soul to a thoroughly dead form. If he succeeds as his task, that covenant will preserve him through all manner of atrocities. However, if he fails, his body and soul are forfeit to the dread GloomWeaver, who will have a new form, one way or another!