Sentinels of the Multiverse: Harpy

If there are 3 or more

Control tokens, increase Projectile Damage dealt by the Harpy by 1. At the end of your turn, either flip a Control token or this card deals 1 target 1 Projectile Damage.
Art: Huginn & Muninn sitting on a rock.
Flavor-text: "They have been with you all along- dual aspects of your personality and your power." - The Scholar, Tome of the Bizarre #74

Power: Reveal cards from the top of your deck until 2 Ongoing cards are revealed. Put one into your hand. Discard the other revealed cards. If there are 3 or more

Control tokens, you may play an Ongoing card.

Art: A purple book with an arcane logo on it sitting on a tabletop;
Flavor-text: "Someday, you should pass this collection on to a pupil of your own, Ms. Diamond." - The Master, Nightmist #73

Control token. The Harpy deals each non-Hero target Infernal Damage equal to the number of

Control tokens. The Harpy deals each target Infernal Damage equal to the number of

Control tokens.
Art: Harpy flinging magic energy at the Chairman;
Flavor-text: "Everything the magic can touch, it can burn. And magic touches everything." - The Harpy, Dark Watch #8

Control tokens. Draw 2 cards. Discard up to as many cards as there are

Control token. You may destroy one of your cards. If you do, flip a Control token. Draw a card. You may use a Power.
Art: Harpy maskless and in exercise clothing casting her magic on her own, while Dark Watch Nightmist stands nearby holding the mask away from her;
Flavor-text: "No, you can't use the mask. You don't need it. But it needs you. Who is in charge here?" - Nightmist, Dark Watch #7

Lash of the Elements (x3)

The Harpy deals up to X targets 1 Lightning, 1 Fire, and 1 Cold damage each, where X = the number of

Control tokens. Then, the Harpy deals herself 1 Infernal Damage for each

Control token.
Art: Harpy hitting Progeny in the back with a lash made of elemental energy;
Flavor-text: "Take that, you fiend! Oh! I did not expect to get your attention so easily." - The Harpy, Freedom Five Annual #29

Control tokens except one. The Harpy deals 1 target X Infernal Damage, where X = the number of Control tokens flipped this way plus 1.
Art: Harpy screaming angrily while magic energy whirls around her;
Flavor-text: "This world is not your plaything! Reality shall survive, but you won't be around to see it!" - The Harpy, Freedom Five #799

Control token. Draw 2 cards. Reveal the top card of your deck. Either play it or discard it. If you discard it, flip a

Control token.
Art: Harpy approaching the Orb of Delirium in the Realm of Discord while looking bedraggled and with a nosebleed;
Flavor-text: "I must persevere. They're depending on me to finish this, no matter the cost." - The Harpy, Tome of the Bizarre #77

When this card enters play, you may discard a card. If you do, you may draw a card.

Power: You may draw 1 card or play 1 Ongoing card. Flip a

Art: Harpy standing near a white magical whirl she's holding Nightmist's Amulet into;
Flavor-text: "Thank you, my friend and mentor. I only wish I could have done more to aid you." - The Harpy, Dark Watch #24

Power: Reveal the top card of 1 Hero deck. Play a card revealed this way. Discard any other revealed cards. If a One-Shot is played this way, flip 1

Art: Harpy smiling happily and summoning her birds from magical portals;
Flavor-text: "Yes, but you do not have to fight alone now. Remember your allies. You are part of a team." - Nightmist, Dark Watch #7

At the start of your turn, flip a

, destroy an Ongoing or Environment card. At the end of your turn, the Harpy deals X targets 1 Projectile Damage each, where X = the number of

Control tokens.
Art: Harpy confronting Gloomweaver with a massive flock of birds;
Flavor-text: "This portal is not for you. You may be right about the chaos inside me, but it is my chaos!" - The Harpy, Tome of the Bizarre #81

The first time each Hero target would be dealt damage by a Hero target each turn, you may reduce that damage by 1. Whenever you use a Power in the Harpy's play area, you may increase by 1 or reduce by 1 one of the numerals in the text of that Power.
Art: Harpy standing in a concentrating pose inside a circle of arcane symbols;
Flavor-text: "The count of reality is entirely subject to observation. Which can be twisted." - The Harpy, Freedom Five #759

At the start of your turn, the Harpy deals up to 3 targets 1 Infernal Damage each. Then, if there are 3 or more

Control tokens, destroy this card. The first time the Harpy is dealt damage each turn, you may flip a Control token.
Art: Harpy standing in the middle of a purple magic energy whirlwind she's controlling;
Flavor-text: "You must learn to control your power, Lillian. Or else it will control you." - Nightmist, Dark Watch #7

When there are 3 or more

Control tokens, she deals that target 1 Projectile Damage.
Art: Harpy walking confidently with her flock of birds through a wind whirl;
Flavor-text: "She now walks with a confidence born of experience and uprightness." - Mr. Fixer, Dark Watch #23 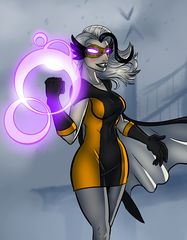 The first time each turn a Villain card other than a Fowl card enters play, play the top card of the Villain deck. At the start of the Villain turn, The Matriarch regains 2 HP.
Art: The Matriarch putting the mask on her face;
Flavor-text: "Thus, I am the Matriarch! From the center to the sea, I rule as queen of the fowl!" - The Matriarch, A Murder: Most Fowl

At the start of the Villain turn, destroy X Hero Ongoing and/or Equipment cards, where X = the number of Cohorts in play. At the end of the Villain turn, put Muninn from the Villain trash into play.
Art: A closeup of Muninn;
Flavor-text: "... until all the beasts are laid low in despair." - The Matriarch, Night's Plutonian Shore #2

At the start of the Villain turn, this card deals the Hero Target with the highest HP 2 Projectile Damage.
Art: Birds picking at bodies in a field;
Flavor-text: "That these fowl shall salt the Earth itself, leaving all groaning for burial!" - The Matriarch, Freedom Five #691

At the start of the Villain turn, this card deals the Hero Target with the highest HP 2 Projectile Damage.
Art: It looks like a silhouette of Tachyon standing in front of a windmill with a swarm of birds around it;
Flavor-text: "Feel the fury of the skies, scorned!" - The Matriarch, Night's Plutonian Shore #2

At the start of the Villain turn, this card deals each Hero Target 1 Projectile Damage.
Art: A large group of birds shown outside a window with one perched on the windowsill. The man inside looks worried;
Flavor-text: "A most pestilent congregation of horrid, flighty creatures." - Fanatic, Night's Plutonian Shore #2

At the start of the Villain turn, this card deals the Hero Target with the lowest HP 2 Projectile Damage.
Art: A closeup on a vulture with a few flying in the sky above;
Flavor-text: "There is no path which the vulture's eye hath not seen... " - The Matriarch, Night's Plutonian Shore #2

At the start of the Villain turn, this card deals each Hero Target except the Hero Target with the highest HP 1 Projectile Damage.
Art: Multiple crows descending from the sky;
Flavor-text: "Fowl of the air! Rain down on all who creepeth upon the earth!" - The Matriarch, Night's Plutonian Shore #2

At the start of the Villain turn, this card deals each Hero Target except the Hero Target with the lowest HP 1 Projectile Damage.
Art: A murder of ravens on a swing set with two more in the sky in the background;
Flavor-text: "The ravens themselves are hoarse, croaking thy fatal exit!" - The Matriarch, Night's Plutonian Shore #2

Mask of the Matriarch 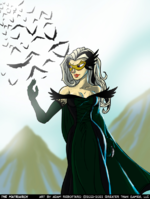 When Lillian Corvus was a little girl, her parents called her “Lily”. She was a bright, happy child who delighted in playing in the park and watching the clouds. Yet as she grew older, she began to long for more. For power. She did not want people looking at her and thinking, or even worse, saying, “Aw, how cute!” Lillian wanted to be feared and respected! Tired of hearing about “how a young lady should behave” and “you should behave more like your very successful cousin”, she rebelled. She began writing dark poetry and allied herself with a group of teenagers that called themselves The Undead Poet Society. When not lounging about in coffee shops or glaring at shoppers in the mall, she spent her time going from antique stores to flea markets, looking for exciting, shiny things.

During one of her outings, she bought an old feathered masquerade mask from a tiny curiosity shop. Upon donning the mask, she felt the ebon feathers ruffle against her face, and could instantly sense some great presence in the sky. Reaching out her hands, she attempted to pull the force towards her, and the sky erupted in a cacophony of caws and shrieks as ravens filled the air. Panicked, she flung her arms outward, and the birds responded, ringing out around her. She found she could control the birds, directing them wherever she wished. Reaching further still, she felt their thoughts, sensing through the birds the very world around them.

Lillian was no more - now, she was The Matriarch! Finally, she had the power she’d craved, and she would gain fear and respect through a reign of terror! 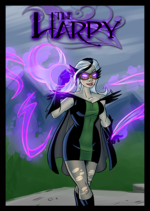 See the Harpy's reveal during the ARG Event in the Odd Allies comic.

The Matriarch, after time in jail, was aided by Nightmist in controlling her magical powers and now fights alongside Dark Watch, hoping to atone for her previous villainous ways.

As the Harpy, Lillian Corvus is a true hero, though she is haunted by her not-so-Heroic past. 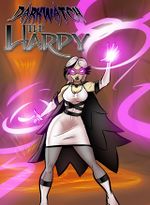 Variant: Originally revealed during the OblivAeon Kickstarter as the $200k stretch reward.

The Harpy is now a full-fledged member of Dark Watch, and studies magic under the careful tutelage of NightMist.

Her powers are an excellent addition to the team, but they all keep their eyes (or in Expatriette's case, her eye) on young Lillian, as her power constantly threatens to get away from her.