The Operative deals the 2 Hero targets with the lowest HP 1 toxic damage each. Reduce the next damage dealt by a target dealt damage this way by 2.
Art: Art of multiple shuriken being thrown;
Flavor text: "The weapons she wields reveal her new master. The slightest scratch could be fatal." - Mr. Fixer, Tome of the Bizarre #40

The Operative deals the Hero target with the highest HP 2 melee damage and 2 toxic damage.
Art: Zhu Long looking on as the Operative and her blade come out of a poisoned pool;
Flavor text: "Your blade is an extension of yourself. Like you, its edge is poisoned." - Zhu Long, Master Dragon

The Operative deals the Hero target with the lowest HP 3 melee damage.
Art: The Operative taking the head off of Cryo Bot;
Flavor text: "I have no patience for distractions. I will strike down any who stand in my way." - The Operative, Mystery Comics #490

Student of Many Masters (x3)

The Operative deals the 3 Hero targets with the highest HP 2 melee damage each.
Art: The Operative slicing through Dr Medico, Mainstay, and Writhe on a snowy field;
Flavor text: "She was unstoppable, cutting through our ranks like a possessed creature." - Doctor Medico, Southwest Sentinels #21

The Operative deals the Hero target with the lowest HP 2 toxic damage. Destroy 2 Hero Ongoing cards in the same play area as a target dealt damage this way.
Art: The Operative dipping a dart in a alter of poison;
Flavor text: "The poisons we deal in here have many purposes. Much like you, young one." - Zhu Long, Master Dragon

The Operative deals each Hero target 1 toxic damage. Any player whose Hero character card was dealt damage this way discards 1 card.
Art: The Operative throwing down a smoke bomb releasing poisonous gas;
Flavor text: "You stand too close to danger. You can't defeat me. Can you even save yourself?" - The Operative, Mystery Comics #490

The first time damage dealt by the Operative reduces a target to 0 or fewer HP each turn, The Operative deals the Hero target with the highest HP 5 melee damage.
Art: The Operative having sliced an opponent into multiple sections sheaving his blade;
Flavor text: "It is not about hitting. Concern yourself with form. Fluid motion. Adaptability." - The Operative, Mystery Comics #489

Reduce damage dealt to this card by 3. Hero targets cannot regain HP. If Fanatic is active in this game, redirect all damage dealt by Fanatic to this card.
Art: The Idolater laughing;
Flavor text: "Hear my tale of the worst of Hell's fiends! The fallen angel, and her falsehoods!" - The Idolator, Fanatic #32

At the end of The Operative's turn, discard the top card of each Hero deck. Then, if The Wraith is active in this game, play the top card of the deck belonging to the Villain character card with the highest HP.
Art: Mayor Overbrook in his office with hand over papers that is also holding a cigar;
Flavor text: "They call him the barber, because he's always taking a little off the top." - The Wraith, Rook City Renegades #9

If The Naturalist is active in this game, increase damage dealt by this card by 2. At the end of The Operative's turn, this card deals the 3 Hero targets with the highest HP 1 toxic damage each.
Art: Professor Pollution blowing smog around;
Flavor text: "When all lay facedown in the muck, none will be greater than any other!" - Professor Pollution, Reality Defaced #4 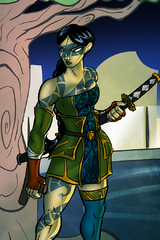 I nnate Powers
Dragon's Frenzy
Ongoing Ability - While the Operative has two health or less, add two dice to all your Attack and Defense rolls, but you cannot Aim or Dodge actions.
Tonfa and Blade
Action Ability
This attack may attack two different targets.

Sophia Anna Isabel DeLeon’s parents, immigrants from the Philippines, died only a year after she was born. With no other family, Sophia Anna was left to fend for herself in a Rook City orphanage. Little Sophie grew up in the hard streets of Rook City, coming to understand at an early age that being strong was all that mattered. The older orphans took what they wanted from her - fear was power, and power got you everywhere.

Kids in the orphanage were invited to take classes for free at a local martial arts school; Sophie started when she was 7. By the time she was 9, the school closed when some of the older martial arts students were killed in gang warfare, but Sophie never stopped training on her own. The older kids learned that messing with Little Sophie just ended with her taking what she wanted from them. By the time she was fifteen, she had organized a group of the biggest, toughest street kids and trained them as pickpockets and street thugs. She had a head for numbers, and her crew began racketeering in the busier parts of the city. By 15 she led her own crew. Then, she got noticed.

In working her way through rival gangs, taking out their leaders personally to add their crew to her own, she found that most of them had a common contact. Seeking out that contact led her on a chase higher and higher through the organized criminal activities of Rook City. Until she met The Chairman. He was waiting for her, and knew more about Sophia Anna than she could even remember. He told her everything that had happened up to that point, and then proceeded to explain how things were going to go from them on.

He admired her strength, her leadership qualities, her intelligence, but most of all, her ruthlessness. He needed someone like her to work at his side; someone to be his hand on the streets. In exchange, he offered the power of working at the top, but also offered to halt her aging process, keeping her at her prime indefinitely. She would forever be in her mid-twenties, strong, sharp, fast, and unfading.

Now, Sophia works as the right hand of The Chairman. She is so feared in the underground world that just the mention of The Operative is enough to close deals and end resistance. She doesn’t work “in the field” as much as she used to, but her training with The Chairman has only made her stronger, and their hold on the city grows tighter by the day. 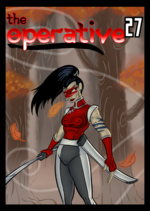 Sophia DeLeon was only a teenager when she met the Chairman. He admired her strength, her intelligence, and her ruthlessness in running one of the toughest street gangs in Rook City. He made her a deal, and Sophia wokred as the right hand of the Chairman. In the underground world, just the mention of the Operative closed deals and ended resistance. However, things didn't always go so smoothly for the Operative.

A mortal injury left the Operative on her deathbed, and her nigh-lifeless body was sent from Rook City to the temple of the mystic know as Zhu Long. There, he brought Sophia back from the brink of death, but at the cost of her servitude. She would work her way back to the her rightful place at the side of the Chairman, but first, she had to repay her life debt.

As an agent of Zhu Long, she fights for his unknowable causes. She still has some access to her former contacts as a part of the Organization, but she is largely on her own. Using her skills and some extra tricks and gear from the ninjas from Zhu Long's temple, she carries out the missions she is assigned by her mystical master. 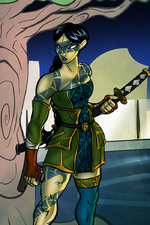 Since the downfall of The Organization, The Chairman has disappeared. The Operative, thought to have been killed, has resurfaced and collected a couple key former members of The Organization, leaving Rook City behind! The Operative is more fearsome than ever before, clearly having undergone significant events, and she is even more focused in her pursuit of power. She has recruited a few new lieutenants, and is now working on infiltrating Megalopolis and establishing her own criminal organization!

Never underestimate the abilities of The Operative. Though she looks to be simply a melee-oriented opponent, she has a legion of tricks at her disposal, and her hand-to-hand combat skills are almost unparalleled.

The Operative wants power. Can you stop her?