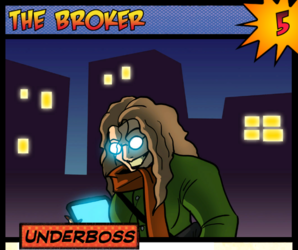 Name: The Broker
HP: 5
Title: Underboss
Found in: The Chairman

Karen McLafferty has always had an affinity for information. Knowledge is power, after all, and power is profit. She set up a series of interchanges wich would mine personal information of anyone who accessed a public computer system, and the systems could be as simple as an ATM or paid with a Credit Card.

She was hired by The Chairman to do her data mining for his Organization, and worked for years as The Broker. The information she gathered from these people allowed her to control key government and military officials, helping make Rook City into the lawless haven of corruption it came to be known as. After the fall of The Organization, she was glad to spread her network even further under the New Organization run by The Operative

This Character has not yet been in a Podcast 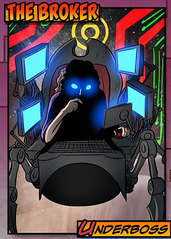 I nnate Powers
Ongoing Ability
Whenever a Thug in the Broker's line of sight deals damage, give one of your allies one Attack +1 Token.
Action Ability
Each Enemy in line of sight gains one Attack -1 Token and one Defense -1 Token.