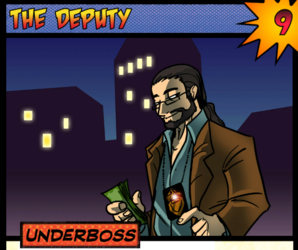 Andrew Sullivan is one of the longest standing members of The Organization. He's seen other Underbosses rise and fall in power, all the while keeping his force in check as The Deputy. He single-handedly controlled the Rook City Police Department until their inevitable fall, shortly after that of the original Organization.

It was no small surprise that, when rebuilding her Organization, The Operative offered Sullivan a job with the same title, but much more power. He had been waiting for such an offer, knowing that people that sought power would always need the type of facilitation he provided. Now, The Deputy is poised to infiltrate the Police Force in Megalopolis. To serve and protect, indeed. 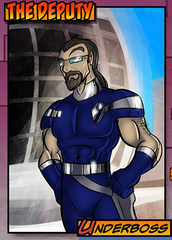 I nnate Powers
Ongoing Ability
Add one die to the Defense Rolls of Thugs in the Deputy's line of sight.
Action Ability