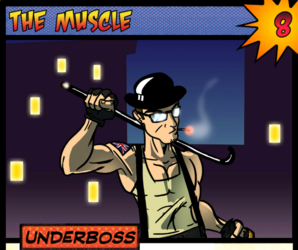 Like the Fence and the Contract, Janos does not appear to be the original Muscle of The Chairman's Organization. The Chairman's version is a small wiry, (possibly irish with the bolar?) man, a complete contrast to The Operative's version of The Muscle. 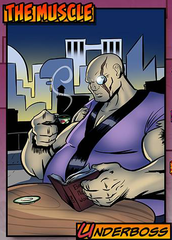 I nnate Powers
Ongoing Ability
Add one die to all Attack Rolls of Thugs in The Muscle's line of sight.
Action Ability

Tales are told of the Skelmersdale Strangler, the Resistencia Executioner, and the Bear of Tamworth. And there are even more, unknown names for things which destroy in the dark. Some consider them urban legends - others obsess with the unsolved crimes. No one knows what any of these Killers look like, other than the fact that they are all giant figures.

Janos Rakoczy has been called many names. He is a terribly clever and dangerous individual; strong enough to crush a stone in his hand, but subtle enough to crush a flower. The Operative knew she needed a singularly capable individual to be The Muscle for her New Organization, and impressed Janos with her Ruthlessness and her ambition. For now, Janos Rakoczy will be called The Muscle.