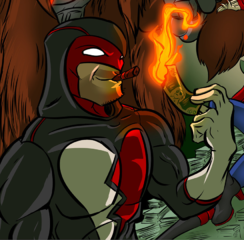 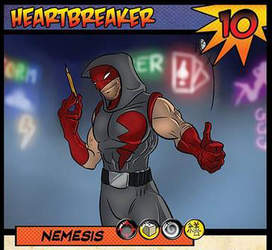 Heartbreaker was a man known as Tony Taurus, a detective in Rook City. He eventually sickened of the corruption in the police force, and left to become a Private Eye. But even then, the corruption and crime in the city drove him slowly mad, eventually cracking him. The pressure of all the wrong doings in Rook City destroyed this once good man, leaving him broken and moral-less. Combined with being forced to fight for his life in the Bloodsworn Colosseum, he turned into a remorseless killer. Now, he has no empathy or care for anything or anyone. Everyone deserves to die, and he may as well make some money in the process.

The masked man known as Heartbreaker has been through a lot. He used to work on the side of the law, but enough corruption can turn the most stalwart of men. Loss and disgrace taught him that he could not protect those around him. Hell, he couldn't even protect himself. But he could take. From lawman to assassin, his life turned from chasing righteous goals and failing, to chasing personal gain and succeeding. Heartbreaker may be a scoundrel, but he knows his business.