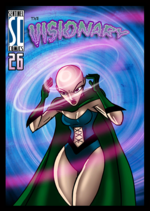 With the fall of South Korea to North Korea and rumors of nuclear testing near the Chinese-Tibetan border, the late 2000s brought with them a growing suspicion of hostilities from the Far East. When the Chinese began establishing military bases throughout the Pacific Islands and finally announced their nuclear stockpile, the U.S.’s suspicions of China’s aggressive new regime were confirmed.

Not wanting to come out the losers of this new Cold War, President Hargett secretly authorized the Department of Defense to begin testing methods of creating bio-engineered soldiers. Early iterations of testing were limited to solders already on active duty, but then Secretary of Defense Anthony Partin greenlit Project Cocoon. Selected from a census of already pregnant Chinese couples with combined high academic test scores, Sun and Pao Long were offered $500,000 to allow scientists to inject their unborn baby with Compound PSY-200.

After six months of weekly injections, Sun gave birth to Vanessa Long. Kept at the testing facility, Vanessa began to exhibit psychic abilities by the age of two months, able to move and manipulate small objects from only a few feet away. At three months, Vanessa’s mother suddenly dropped dead. Unable to confirm that Sun’s fatal brain aneurysm was unrelated to the injections, President Hargett ordered the program to be shut down. Plagued with grief over his lost wife, Pao wanted nothing to do with his infant daughter and left her in the care of the U.S. government. The sole success of the program, Vanessa would be trained to use her powers for combat and reconnaissance.

Fast forward to 2018: the U.S., already severely crippled by an increase in super powered criminal activity, fell to the combined forces of the Pan-Asian People’s Republic. While she’d fought alongside other heroes, including the Freedom Six, her efforts eventually proved fruitless. Realizing that there was nothing else she could do in her time, Vanessa, now calling herself “The Visionary”, used her psychic powers to transport herself back to our present. Unfortunately, psychic time travel is not without its costs. An inter-dimensional hitchhiker, another version of Vanessa who had made very, very different choices, now occupies a corner of her psyche, and the great strain required to bend time ruptured a blood vessel in her brain. While she could use a portion of her abilities to slow the bleeding, her time was still limited. With some extra baggage and a ticking clock, The Visionary will have to use everything at her disposal - both to save the free world and her infant self. 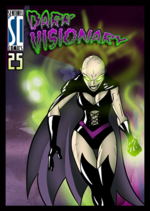 Less than a year after using her considerable psychic abilities to wrench herself backwards through time, Vanessa Long could feel the impact of her actions. She constantly ached, fought against daily migraines, and her mind was scattered - focusing on this time and reality grew more difficult with each passing day. Worst of all, the dark version of herself which had "hitched a ride" on her jaunt through time fed off her pain.

All it took was the right amount of stress. In battle against the dreaded GloomWeaver, The Visionary wrapped herself in a telekinetic cocoon in order to avoid a swarm of arcane cultists, but when she did so, her fellow heroes heard a muffled scream from within the glowing purple energy barrier. It shattered with a burst of green energy, throwing cultists about like rag dolls. A pale, maniacally grinning Vanessa Long strode forth, waving a dismissive gesture at GloomWeaver, which banished him from this realm entirely.

This Visionary felt different … darker. However, she still knew all the heroes, and she had helped against the villain. When questioned, she insisted that she was fine. In fact, she felt better than ever before! So, Dark Visionary fights alongside the Sentinels of the Multiverse … for now … 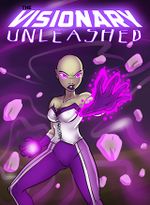 The Visionary was overwhelmed by the dark force within her years ago. Since then, she has been masquerading as a hero, all while subverting those around her, and using her position as a hero to benefit herself and grow in power.

During a cosmic event in which all of this world’s heroes were brought together and pitted against each other, the Argent Adept became aware of the fact that the dark version of the Visionary had taken control of her form. As Dark Visionary attempted to incapacitate the musical magician, he delved deep into the Void to reach into Vanessa Long’s psyche and free her from the dark influence therein.

Now the Visionary stands alongside her fellow heroes, no longer burdened by the darkness that has plagued her since she first set foot in this reality. Her mind is focused and sharp, and just in time, too. The heroes will need all the help they can get against this cosmic foe that approaches Earth.

When The Visionary psychically hurled herself backwards through time, she knew that she would barely survive, at best. She wasn't wrong. However, years have passed, and The Visionary continues to work alongside the heroes of this time - not her time, but a time she helped make and helped preserve. She has found her access to the timelines cut off by recent events, and has little issue with that. But her body is failing as her mind becomes less and less connected to the physical world. She has taken to keeping an object of focus close at hand, psionically manipulating it constantly to keep her psyche connected to reality.

The Visionary still fights the foes of this time. She knows not how much time she has, but she does know that, surprisingly, she has grown attached to her allies here, and reflects sometimes that she will miss them. She is harsh in her treatment of foes, but not quite so harsh as she used to be, as she has learned valuable lessons in the alluring pull of negative energy.

What the future holds for The Visionary is uncertain. She is unused to having a wide-open future. And she welcomes it, eagerly. She has evolved from the last hope for existence to her own hope for beautiful uncertainty.

Eventually, around issue 30 of the Prime Warden's relaunched book, Visionary dies. She is unable to continue to keep herself alive, having spent far to long with death hanging over her from her time jumping stunt so long ago. She has been practically dead for a very long time now, only staying around because of her intense psychic power. Eventually, she can't handle it, and simply passes